Equity Gain is proud to launch our latest endeavor stretching beyond our local boarders and into Indonesia.

Bali offers a real estate opportunity like no other

With tourism numbers increasing back to pre-pandemic numbers and old accommodation no longer favorable, Bali offers extremely unique opportunities for savvy investors that are simply not achievable in Australia.

This is the obvious first question. The answer needs to be broken down into several parts though to gain a full understanding as to why we are turning our focus to Bali for investment. Here’s the main reasons why we want to offer this opportunity to our clients.

Let’s break this down to understand each of the above points better.

In Australia the owner of the land is the homeowner (title holder). There are a few different types of land titles depending on what the landowner owns, but mostly they prove the landowner has a title deed to their land. In Bali this is the same under the Free Hold land option which is only available to Indonesian people. No foreigner can own a Free Hold title in Indonesia, in their own name by local law. As a foreigner you have a different option known as Lease Hold.

This option is seldom understood at first by homeowners of countries outside of Indonesia. As an Investor, you don’t need to own the land to make a profit. This is a very different concept than many people would grasp at first. Rather than owning the land, you can control the land and any assets built on this land through what is known as a Lease Hold agreement. This agreement is common place in Indonesia and holds full legal weight to both parties.

This unique opportunity allows the lease holder to control the property and bank the rent payments each month.

Low cost of entry is permitted by smaller block sizes and smaller villas to suit the demand of the market where the new villa will be built. We specialise in sourcing the right area for the type of villa being built to maximise the rental return on a smaller budget. 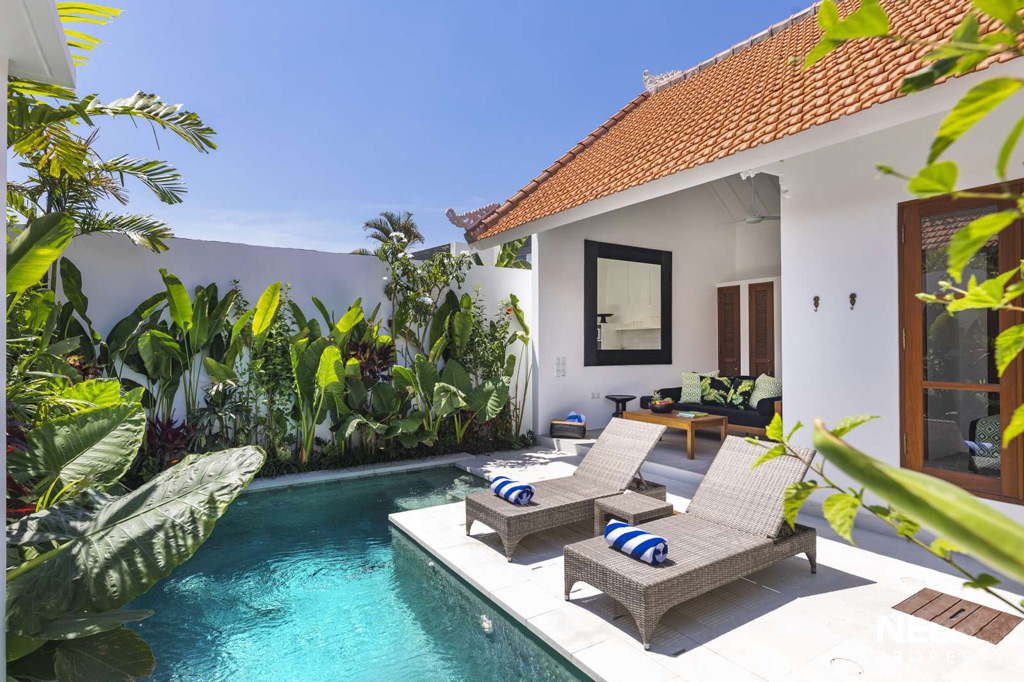 Since the land is leased and not bought outright the numbers of the investment are now heavily weighted towards the lease hold owner when it comes to positive cash flow. There is absolutely no debt on any property which remove the need for repayments to be added to the expenses. There are also no annual land taxes to pay as these are paid by the land owner. You simply need to cover any maintenance costs and management costs of the villa and then bank the returns allowing for a much higher ROI than in most other countries. Depending on the rental type the lease hold owner may also be responsible for electricity, Water and Insurance.

Bali has always been a favorite place for Aussies to holiday due to the close proximity of Australia. Aussies get out of the winter blues and into tropical surroundings to escape the cold.

Many other Asian countries with money to spend have now also found this hidden gem in the south. Rental demand has never been stronger than it is right now.

Through our Bali Invest package, investing into Bali has never been so simple. We look after all aspects of your investment on your behalf and introduce you to Accountants, Notary’s, Lawyers and Property Management companies that will handle the day-to-day processing of your investment. It really couldn’t be any easier than this to invest in a foreign country. 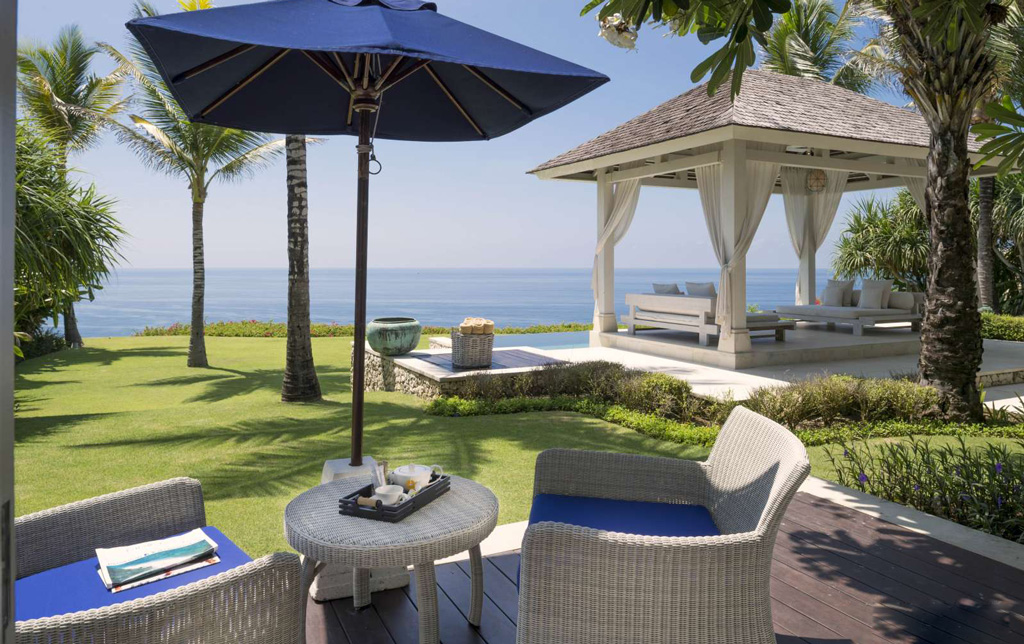 Using our proprietary Bali Invest model, you simply buy shares in a company owned and operated in Bali Indonesia. The company that you become a shareholder of, will own the property and have the legal rights over the lease hold for the agreed period of time.

To make this extremely simply to understand, let’s use $300,000 as the property price on a lease hold agreement for 30 years. We need to allow a safety buffer of funds for each project of $10,000, then we need to allow set up costs for the company of $3,000 and accounting and legal fees of a further $5,000. Equity Gain charge a once of Facilitation Fee of $15,000 to source the land, builder, legal team, accountant, and management team and put the entire package together from inception through to the rental.

Here is a breakdown of the numbers in this example: 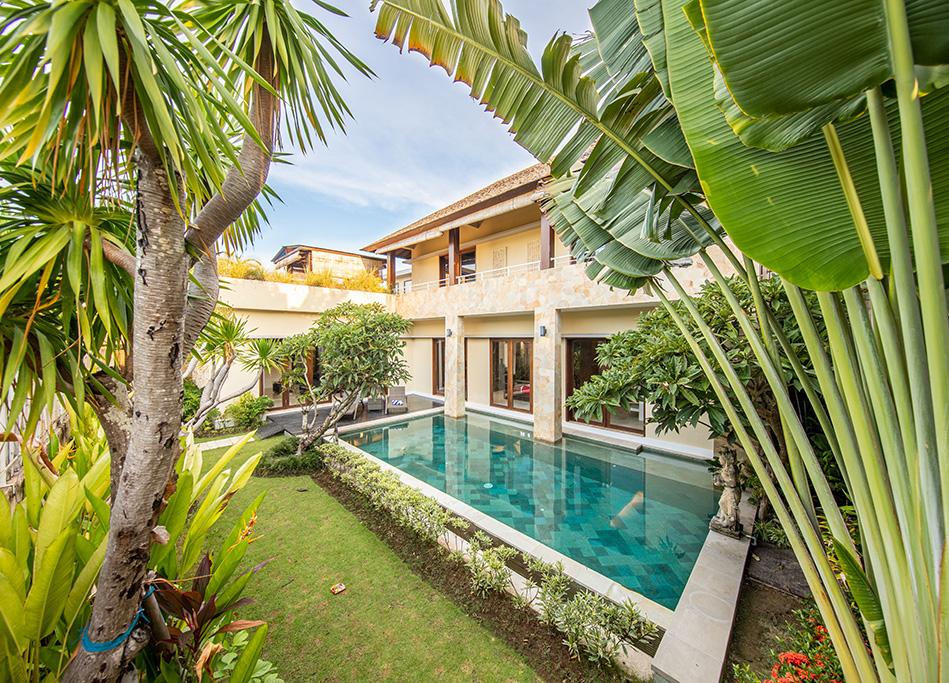 As part of the investment, you will buy as many shares in the company as you choose. Each share costs the equivalent of $25,000 AUD in Indonesian currency. As the amount above is $333,000 we need to increase this to $350,000 to start the company. Any excess funds will simply be distributed back to the share holders once the Villa is completed and rented.

This means that there will be 14 shares available within this company for purchase. Once they are sold, they will no longer be available, and the property development can commence. Any investor can choose to buy 1 – 14 shares. As soon as any shares have been purchased, then remaining number will be available until sold out. This allows someone who would like to invest $100,000 to purchase 4 shares and someone only wanting to invest $25,000 to purchase 1 share.

The structure allows all shares holders to receive the same percentage return of the total based on the number of shares purchased.

When do I sell?

As part of the entry strategy, we need an exit strategy. For this it is very simple. All projects that we put together have a default timeline of 10 years. This means that in 10 years’ time the accountant managing the company will put a vote to the shareholders as to if you would like to continue or if you would like to sell. If continue is chosen, then the following year and each year there after the accountant will require the same response.

If the consensus is to sell the property, then the price the property is sold for, less any marketing/selling costs, will be paid out by the accountant to each shareholder based on the number of shares owned. At this point the company would be dissolved and the investment is at an end. Remember that the original lease hold was for 30 years and we are now 10 years into this agreement. The property you will be selling is the same property with 20 years lease hold remaining. Depending on the market conditions at the time, it would not be an unlikely event to sell the property for the same amount as it was purchased for 10 year earlier due to the price of the land increasing in value over that period. In this case you have had 10 years’ worth of free cash flow each month and your original investment back after 10 years! 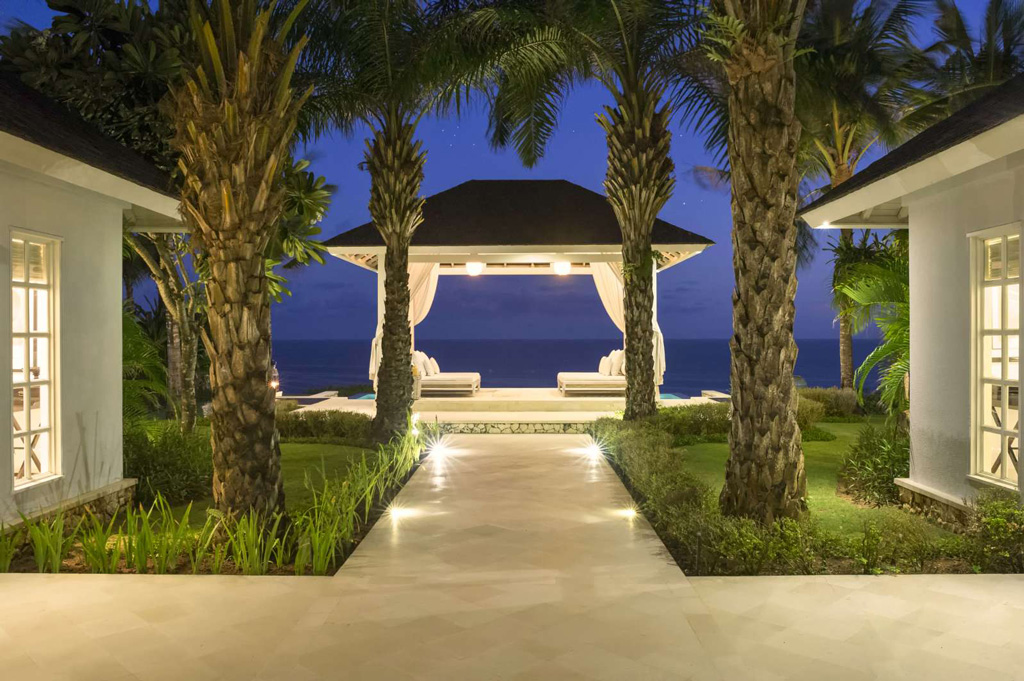 What if I want to sell in 5 years’ time?

Our staff will walk you through this very simple process step by step. Our Indonesian accountant will open a new company called “Bali Invest One” or similar. Once this company is opened, they will determine how many shares will be available to purchase within the company based on the property and leasehold arrangement that Equity Gain put together. Using the above example, they would issue 14 shares. The accountant will then open a bank account in Indonesia for the company and they will be the only person authorized to make transaction on the bank account on behalf of the investors/share holders.

Equity Gain will work with clients interested in buying shares until all the shares are sold and the company is funded to capacity. At this point Equity Gain can then move forward on their preselected parcel of land under a lease hold agreement in the company name. All this information will be presented to our investors/shareholders prior to entering into this agreement. Your lawyer/notary will complete all the paperwork on behalf of the investors/shareholders and arrange for the land owner to sign the lease agreement with the company.

This build process in Indonesian takes approximately 12 months to complete. As the build is nearing completion, the property manager will be assigned to the property and the rental preparation will commence. As soon as the build is completed, the furniture package will be installed making the villa ready to be advertised for rental.

As a share holder you can expect to receive your first rental payment 13-15 months after the villa construction commences. Then every month you will receive a payment from your management company after any expenses are deducted. 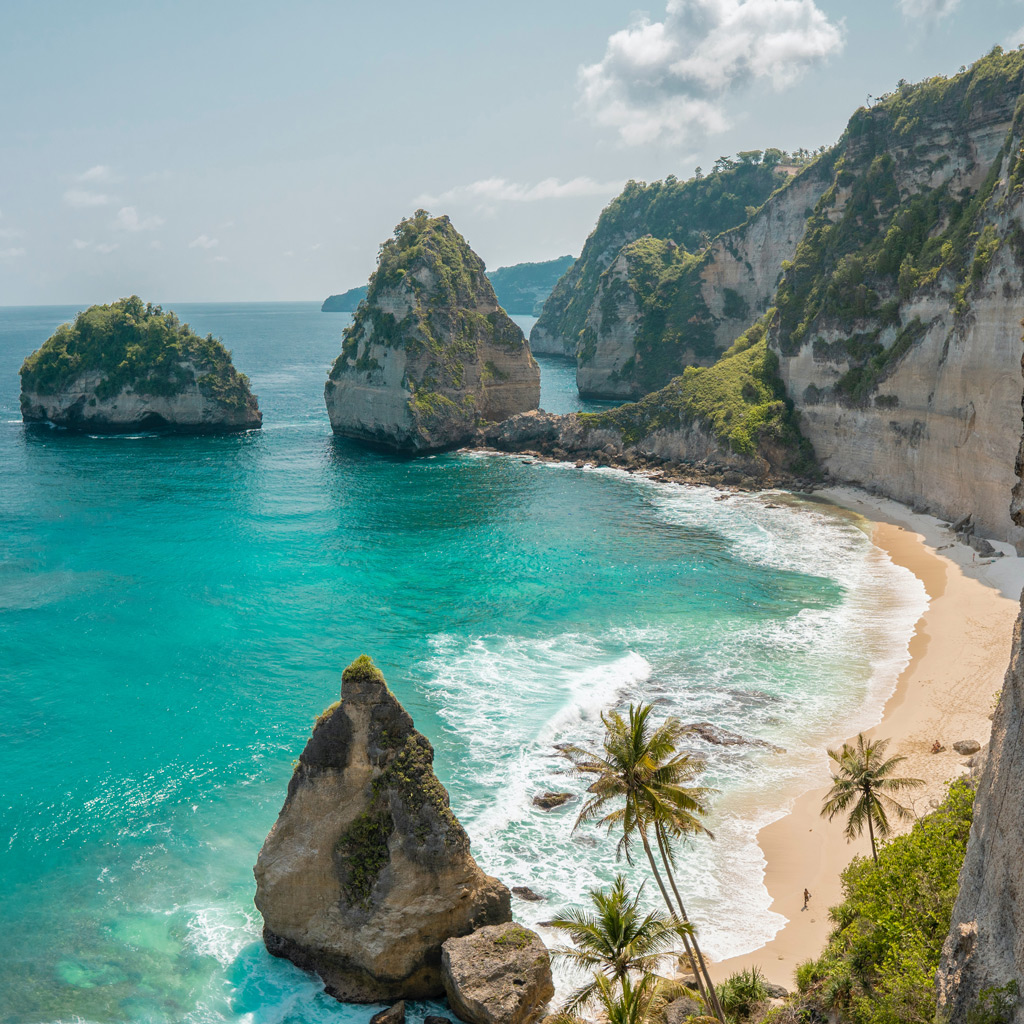 Steps to become a property owner in Bali:

Let us know that you would like to proceed

Sit back and relax, whilst Equity Gain and our Indonesian partners do the rest on your behalf!

It really is that simple

What Our Clients Say

The team at Equity Gain did an amazing job - Everything went like clockwork and faster than we had anticipated and we were kept informed at every step of the way. We would recommend Equity Gain to anyone contemplating an investment property.
Anne & John OGeelong
We are so impressed with our new property through Equity Gain. We are looking forward to buying our second investment property as soon as we can afford to.
Shaun & Susan GGeelong West
Thank you Joe for being so patient with us. The team were great and we are so proud of our new investment property.
Jono and Rachel JSouth Melbourne
Many of my friends had invested in property in the past by the time they were 45. I had never thought that I could invest in property as I am a moderate income earner and my wife looks after the kid's fulltime. I was very surprised to see how the taxation and interest worked on the investment and how little I had to front up with each week.
Pete & Jen PCraigieburn, Melbourne 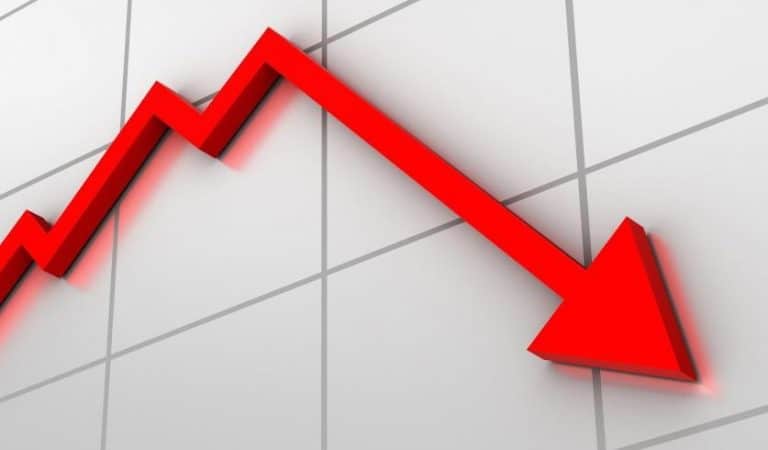 According to property advisory firm Charter Keck Cramer, Sydney, Melbourne, and Brisbane will suffer a shortage of new housing by […]

The number of Australians buying land has increased significantly as buyers benefit from affordability. House prices were falling across the […]

Is rental property a good investment? Great news for landlords, vacancy rates have been falling, and rents are rising across […]

Equity Gain are Property Investment Specialists who continually analyse the market so they can provide their clients up-to-the-minute advice about all aspects of the real estate market in Australia.